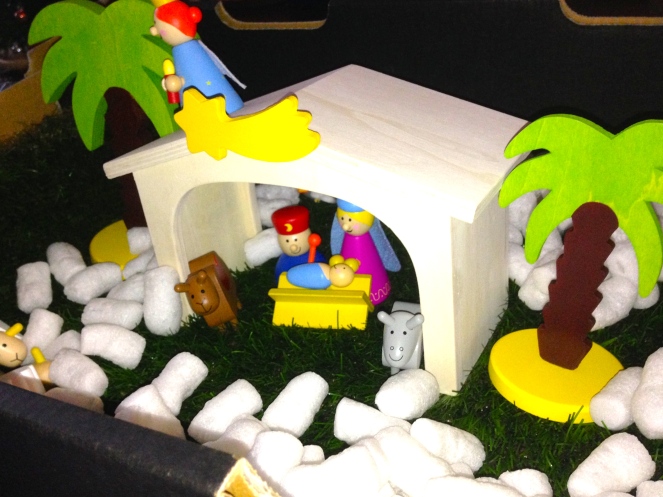 As part of our little Christmas tradition we purchased a new wooden nativity set which I placed in a box to be pulled out for sensory mat time play.

I put a synthetic grass base and fill the box with foams that make for a wonderful nativity scene.

When the children have finished playing and setting up the stage, I pulled out different nativity scripts for their play to come to live.

For greater durability I laminated 4 double sided scripts taken from here and also prepared the different characters for younger hands to hold and move around. I am using little magnets on the back of the pieces and get the young ones to act out the characters as the older one reads out the script.

There is endless possibilities with a sensory box play. The children love the telling and enacting of the nativity story. It also builds into them an understanding of why Jesus came into the world as a helpless baby.

It is beautiful to see the kids playing and telling each other the Christmas story, with soft Christmas music and lights in the background. You can also turn the audio nativity story in the background for a quieter afternoon play to let the message of Christmas permeate into hearts and minds and the atmosphere of your home.

Through the nativity story I am reminded too why God came into the world and breaks in on our everyday.

“And while they were there, the time came for her to give birth. And she gave birth to her firstborn son and wrapped him in swaddling cloths and laid him in a manger, because there was no place for them in the inn”. —Luke 2:6–7 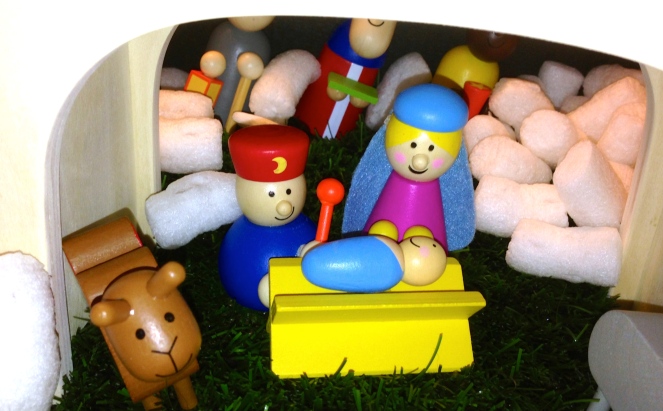 Piper wrote in his devotions,

May we remember that He truly is a God for little people like us even as we cherish this Christmas season!